Life Sciences
Back to news overview

Tokyo, Japan – August 6, 2013 – JSR Corporation (President: Mitsunobu Koshiba) and SCIVAX Life Sciences, Inc. (President: Satoru Tanaka) have entered into a strategic partnership to develop and expand the three-dimensional (3D) cell culture business. Through this agreement, JSR became a minority owner in SCIVAX Life Sciences and secured rights to sell its products to the global market via JSR’s global network including JSR Life Sciences Corporation in Japan/Asia, JSR Micro, Inc. in the US and JSR Micro N.V. in Europe.

SCIVAX Life Sciences has developed proprietary technology in novel 3D cell culturing. Its product, NanoCulture® Plate, has been used at various pharmaceutical companies and academic institutions for advanced drug discovery research, mainly in Japan and the US.

3D cell culture technology is a culture method to form in vivo-like 3D multi-cellular spheroids. Findings show that 3D cell cultured spheroids have characteristics more similar to in vivo cells than those cultured by other methods. As a result, 3D cultured spheroids are expected to accelerate further advancements in understanding the mechanisms of disease, development of novel treatments, drug discovery and more.  Currently, NanoCulture® Plate is used primarily for cancer research but has potential to be expanded into other areas such as testing anticancer drug sensitivities and regenerative medicine solutions like iPS cells. 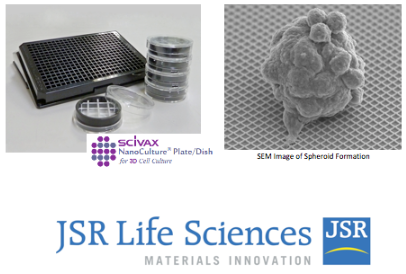 Poster: Optimizing the coating procedure of a recAg to Tosyl beads in a CLIA assay

We use cookies on this site to enhance your user experience

By clicking any link on this page you are giving your consent for us to set cookies.